I finally just sat down and started working my way through my backlog on reading. I previously read This World Bites by Loni Townsend, which I thoroughly enjoyed and am now working my way through Thanmir War. I highly recommend fantasy readers to take a look at her work. She’ll be at Indie Author Day in Boise so if you’re in the area, come meet her! Her bio is in the list below.

Indie Author Day is now only a week away! Below I’ve shamelessly copied some of the information about Boise’s upcoming event:

If you’re a writer – aspiring, bestselling, or anything in between – we hope you’ll join us for Indie Author Day.

Festivities will include panel discussions on publishing, author resources, and elements of craft; a local author reading and book sale; and a digital gathering featuring authors, agents, and other industry leaders.

Panel discussion: Marketing your book to fans and fans-to-be

Speakers and participating organizations:
The Cabin annually serves about 500 member households, more than 2,000 children and youth, and more than 16,000 people through educational and cultural programs. Their mission is to inspire and celebrate a love of reading, writing and discourse.

The Idaho Writers Guild offers professional networking and educational opportunities as diverse as the writers who join it. In addition to serving as a networking resource for writers wishing to become actively involved in the writing community, the IWG plans and develops programs to aid writers. Our membership reflects all genres and media.

E.L. Skip Knox is a writer and historian. He is the creator of the fantasy world called Altearth, a place where magic is real, monsters roam the land, and the Roman Empire never fell.

Skip has published a novelette (The Garden of Hugo Vuerloz, 2013, available on Amazon) and a short story (The Roadmaster). The short story was selected as an Editor’s Choice at Bewildering Stories for 2012. He is currently completing his first Altearth novel, Goblins at the Gates, and is one of the moderators of Mythic Scribes, a forum for writers of fantasy.

With an M.A. in Medieval History and a PhD in Early Modern History, Skip has been published in a Festschrift, in Asynchronous Learning Environments Magazine, and has four articles published by ABC-Clio. He has also presented several papers at Educom and at academic conferences.

He is a pioneer in web-based teaching, developing the first virtual course on the Renaissance (1993) and the first college-level virtual Western Civilization course (1994) to be available on the Web. He also teach courses on the Crusades and the Reformation. All course essays are free to read at europeanhistory.boisestate.edu

When not writing or teaching, Skip loves to spend time with his wife and childhood-sweetheart, Debra. Two dogs, video games, cooking, and travel occupy much of the rest of their time.

Logan Miehl loves writing from anywhere with a plugin for her laptop—ideally among her native Rocky Mountains, where she enjoys hiking and camping with her husband. The travels that inspire her stories include the year she spent exploring the country of Ireland, and later living as a volunteer missionary in both Virginia and Rio, Brazil. Logan believes traveling is life’s greatest teacher, and she hopes that her readers will discover new and exciting places through her stories.

Joanne Pence is an award-winning, USA Today best-selling author of the Angie Amalfi and Rebecca Mayfield mysteries as well as historical fiction, contemporary romance, romantic suspense, a fantasy, and a supernatural suspense series. Joanne has been both a “traditionally” published and an “indie” published author, with about 14 books in each category. Her books have won or been nominated for a number of high honors, including the Willa Cather Literary Award for Historical Fiction; RWA’s Rita and Golden Heart Awards; the Daphne du Maurier Award; Romantic Times Career Achievement Award; and the Idaho Top Fiction Award for mystery. Born in San Francisco, she now lives in Boise, Idaho where she has been president of the local Sisters in Crime chapter, and is a founding member of the Idaho Writers Guild.

Bruce and Laura DeLaney opened Rediscovered Books in September of 2006 to create a place where people could find books and conversation. Since then, Rediscovered Books has grown into Boise’s downtown community bookstore, providing literature for the Boise area, author events, and an expert staff to help match customers with the right books. Rediscovered Books is active in engaging in discourse about interesting books, and we are always ready and excited to share our passion for reading.

Matt Sharar is the author of the 5-book all-ages fantasy series, GARDEN TIME. He has also published two short story collections, SAN PEDRO STORIES (about his hometown) and GOTHIC TALES, as well as the novella for Banned Books Week, THE STORY OF THE COMMON HANGMAN. He has also finished the first book in his adult fantasy series, THE SHADOW CABINET. He lives in Boise, Idaho. His books showcase covers by celebrated artists: photographer and musician Mike Watt, NY Times Bestseller Nate Powell (MARCH), and Eisner Award Nominee Brett Weldele.

Clara Stone lives in the beautiful city of Boise, ID.  Unlike what most believe about Idaho, it’s more than a sack full of potatoes. When she’s not writing, you’ll catch Clara reading mostly YA books and enjoying time with her family. She is a proud CW TV addict.

The Dracian Legacy is her first YA paranormal romance series. She strongly believes that true love conquers all and that’s a common theme you’ll find within her novels.

She is published through Reuts Publications.

Loni Townsend Wife. Mother. Writer. Ninja. Squirrel. By day, she writes code. By predawn darkness, she writes fantasies. All other times, she writes in her head.

People call her peculiar with a twisted sense of fashion, but don’t let those understatements fool you. Her behavior is perfectly normal for a squirrel disguised as a human. That’s part of being a ninja—blending in.

Lisa L Wiedmeier loves hiking, camping, watching her boys fish, and taking long walks with her yellow labs, Taylor and Mandi. She enjoys cooking when the mood hits, and not only has she published a nine-book YA paranormal romance series, but she’s the master of redesigning just about anything. She’s the DIY author who has made Idaho her home for 28 years, and she can’t wait to spend another 28 years here.

Christian Winn is a fiction writer, poet, and sometimes journalist who writes and teaches fiction at Boise State University, The Cabin, and the Writers Writer Workshop Series. He is the 2016-2019 Idaho Writer in Residence. His work has appeared in McSweeney’s, Ploughshares, The Chicago Tribune’s Printers Row Journal, Gulf Coast, TriQuarterly, Hayden’s Ferry Review, Santa Monica Review, The Pinch, Story Houston, and elsewhere. His debut collection, NAKED ME, is recently out from Dock Street Press who will be publishing a second collection, WHAT’S WRONG WITH YOU IS WHAT’S WRONG WITH ME, February ’17.

Erica Crockett knew she wanted to be a writer as soon as she could chew on a pencil. Her first novel, Chemicals, exploring the dystopian nightmare of a world without pharmaceuticals, was released in 2014. Her newest venture is the twelve-book, serial killer thriller series, The Blood Zodiac, which began in March 2016 with The Ram. In addition to writing novels, Erica also writes comics, including the webcomic Kali, and Subterra with Mike Dreher. Her comics work has appeared in the anthologies 6×6:Feral and The Wisdom of Fools. She’s also delving into humorous picture books with artist Sarah Ragan Olson, beginning with What Weeds Are Thinking. When not writing, she’s traveling the world, adding to her list of countries visited. She’s currently at twenty-three. Erica has been a book-schlepper, an adult educator, a marketing rep, and a gold miner. Twitter: @EricaCrockett

Heather Lee Dyer lives near Boise, Idaho. She has published three books in the Recycling Humanity Series, and one romance novella. She is a poet, space enthusiast and fangirl of most things YA, Sci-fi, romance, or paranormal. Addicted to Sci-fi Conventions and Pepsi. Book nerd.

Kurt Zwolfer is The Cabin’s Executive Director. He has over fifteen years of experience creating and administering public education programs including previous work at Idaho State Parks and The Idaho State Historical Museum. He has a BA in Rhetoric with a minor in film studies from the University of Illinois and a MA in Curriculum and Instruction from Boise State University.

Margo Kelly loves to be scared … when she’s reading a good book, watching a good movie, or suffering from the hiccups. She loves writing mysteries and thrillers for young adults and hopes her stories give you the goose bumps or the itchies or the desire to rethink everyday things. Margo is a native of the Northwest and currently resides in Idaho. Her award-winning debut, Who R U Really?, was published by Merit Press (an imprint of F+W Media) in 2014. Her second novel, Unlocked, also published by Merit Press, released October 1, 2016. 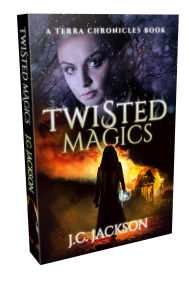 This event is turning out to be amazing. If you’re in the area, I urge you to come down and check it out. There are also other events scheduled in the Treasure Valley in both Meridian and at the Ada Victory branch (though I can’t find their schedule). If you’re not in the area, check the national site for who is holding events near you.

I’ll be in Boise with copies of Twisted Magics for sale. Come down and say hi!